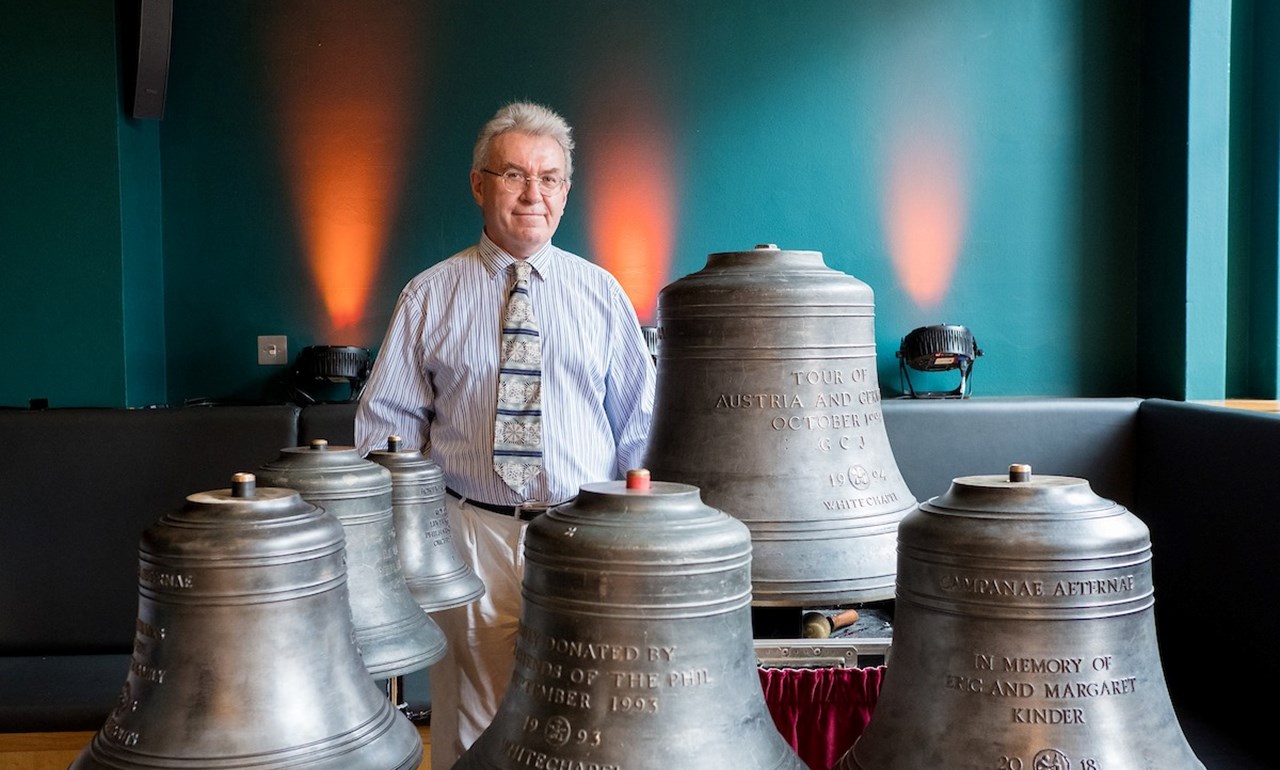 Royal Liverpool Philharmonic now owns the largest collection of church bells of any UK orchestra.   The purchase of these bells, 14 in number, has been funded by Liverpool Philharmonic donors, who, have had their names cast on to the bell they helped to purchase, as a permanent testament to their generosity.

The ‘Forever Bells’ project means that the bells can be seen and heard by future family members down the generations, whilst giving glorious pleasure to listeners and musicians, and very importantly, enabling performances of works with real bells that were never before possible.

The bells were made in the Royal Eijsbouts Bell Foundry in Holland. They feature, in beautiful bronze relief, the Liver Birds and the official flower of Liverpool, Sea Holly.

On Thursday 19 September, the Royal Liverpool Philharmonic will be the first orchestra in the UK to perform Berlioz’s famous Symphonie Fantastique with the correct low bells, as originally specified by the composer.

One of these huge bells has been dedicated to the Orchestra’s Chief Conductor Vasily Petrenko, in gratitude for what will be 15 years at the helm when he steps down in July 2021.

Hiring the bells to other UK orchestras has become an additional feature of the project, thus providing an ongoing, future income stream.  Shostakovich’s Symphony No 11, recently performed at the BBC Proms by the BBC Philharmonic Orchestra, used bells from Liverpool’s new collection. This was a UK first, and was also recorded for CD. Also, most recently at the Proms with the BBC Concert Orchestra, the first performance for 100 years using eight Church bells in Debussy’s Sunken Cathedral, arranged by Sir Henry Wood, founder of the BBC Proms.

In 2020, the Orchestra will perform Mahler’s great 3rd Symphony in another UK first performance with real church bells.

Graham Johns, Section Leader, Percussion, whose passion for church bells was instrumental in making this project a reality said:

“I had a vision of one day performing with a full set of real bells and the inspired generosity of our donors has made this dream a reality. Before the bells arrived, in keeping with all other orchestras, it was standard to use a range of tubular bells.

Tubular bells never really hit the spot, being thin in sound and unable to project the dark and sombre timbre required.  There is nothing like the sound of the real thing.

I’m proud to say that in Liverpool, a UNESCO city of music and a city known for musical ‘firsts’, we’ve added another one to the history books with our set of church bells.”

Tickets for 19 September and 22 September (same programme) available at https://www.liverpoolphil.com/whats-on/classical-music/symphonie-fantastique/3311