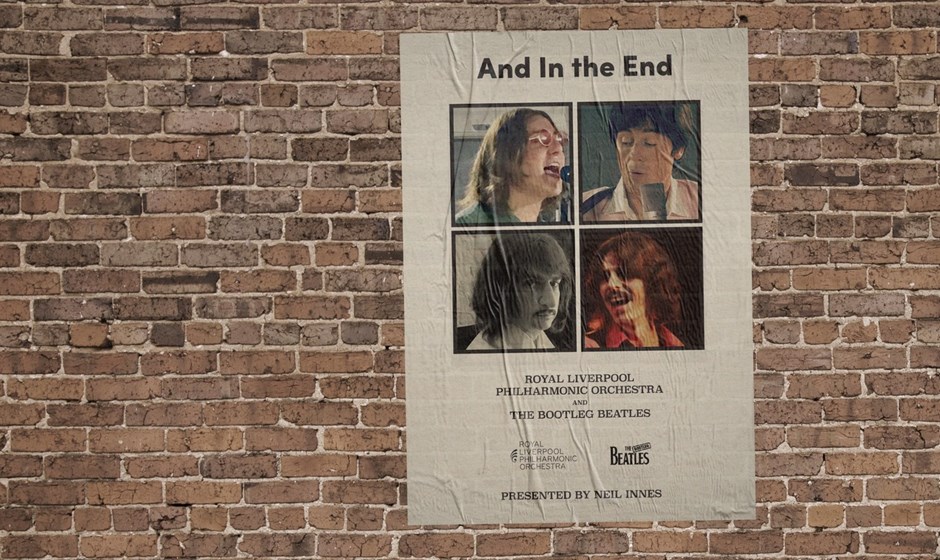 The award-winning Royal Liverpool Philharmonic Orchestra and the nation’s premier Beatle group The Bootleg Beatles (‘magically real’ NME) are delighted to announce they will team up for a second time for a number of special concerts in 2019 and 2020 to mark the fiftieth anniversaries of the releases of two of The Beatles’ most iconic albums, Abbey Road and Let It Be.

‘Celebrating the 50th anniversary of Sgt Pepper, the real band would have struggled to fake it as well as this…. it was as exhilarating as that remarkable album itself.’ The Times ***** June 2017, Liverpool Philharmonic Hall

This unique production will premiere with two shows at Liverpool Philharmonic Hall, the first, 50 years ago to the day of the release of Abbey Road (26 & 27 Sept 2019), followed by a national tour to prestigious venues around the UK ending at Clyde Auditorium on the 50th Anniversary of the release of Let it Be (8 May 2020).

The music of these two iconic albums is arranged by composer Ian Stephens in this special musical collaboration, employing the full majesty of a 70-piece symphony orchestra with The Bootleg Beatles performing timeless classics including masterpieces such as ‘Here Comes The Sun’, ‘Come Together’, ‘The Long and Winding Road’ and ‘Let it Be’.

Neil Innes, writer, comedian and musician, (Monty Python, Bonzo Dog Doo-Dah Band, The Rutles) presents this unique live staging which will be an unmissable event for Beatles fans of all ages.

‘Ever imagine what it would have been like to see the Beatles backed by a 70-piece symphony orchestra? Pretty damned special actually.’

‘Composer Ian Stephens’ music has been performed by the Royal Liverpool Philharmonic Orchestra on numerous occasions, as well as by other UK orchestras and ensembles. Ian will do a fantastic job in bringing the music of Abbey Road and Let It Be to the stage, giving one of the world’s great symphony orchestras and The Bootleg Beatles the platforms they deserve.

‘To present these concerts in Liverpool and to take And In The End on tour to some of the UK’s most prestigious venues is a real privilege. The book-ending of the tour with the 50th anniversaries of the releases of Abbey Road and Let It Be is testament to the resonance and influence that four lads from Liverpool and their seminal albums continue to exert on music today.’

‘The Bootleg Beatles/Liverpool Philharmonic collaboration to bring the Sgt Pepper album to life on stage was such a wonderful, creative, often challenging but hugely rewarding experience. Frankly I cannot think of anything more exciting than to repeat the whole process all over again.’

On bringing Abbey Road and Let It Be to the stage, composer/arranger Ian Stephens said:

‘I’ve known these albums all my life, but in preparing these orchestral versions I’m getting to know them a whole lot better!

‘I began by listening to the original tracks intensively with Andrew Barreau from The Bootleg Beatles, working out all the places where the orchestra takes the limelight – where it will provide a huge surge of brass-led power, or a lush dose of strings – and the places where it can take more of a background role.

‘Then I lovingly transcribe all the songs by ear, getting down all the melodic and rhythmic details, every one of those intricate vocal harmonies that makes the music of The Beatles so addictive.

'I’m keeping true to the spirit of George Martin’s timeless arrangements, but adding a super charged orchestral scaffolding. The brilliant musicians of the Royal Liverpool Philharmonic Orchestra will really be able to let rip, adding a whole extra level of power and beauty.

'What a privilege it is for me – a Devon boy but a Merseysider for the last 20 years – to be orchestrating this great music. I can’t wait to hear the final result!’

And In The End…

A Celebration of Abbey Road and Let It Be

All concerts on sale Wednesday 17 October 2018

For The Bootleg Beatles