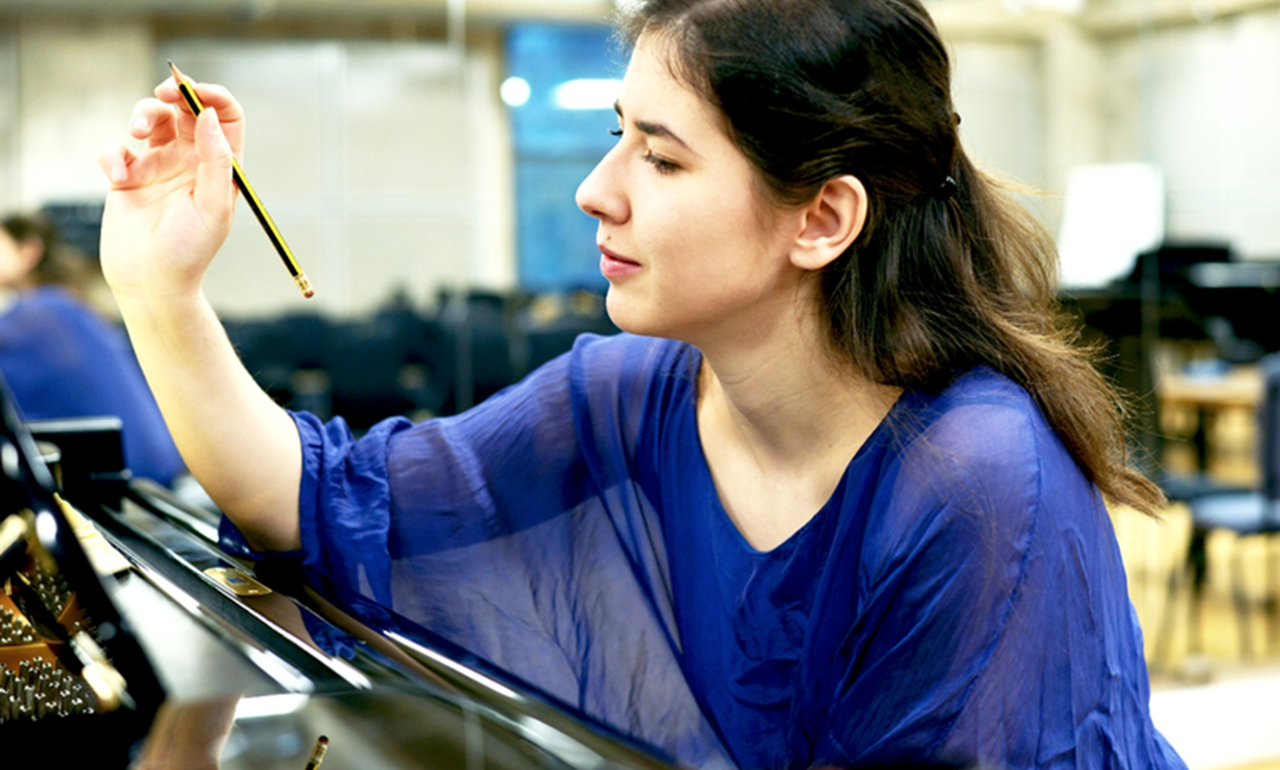 Liverpool Philharmonic is delighted to announce 24-year-old Athanasia Kontou as the 2019 winner of its annual Christopher Brooks Composition Prize for young composers.

Athanasia (b.1995) wins a cash prize of £1,000 made possible through the support of Lancashire Sinfonietta Legacy Fund and The Rushworth Foundation, and a year’s complimentary membership of The Ivors Academy of Music Creators. All three organisations are supporting the competition for a fifth year running.

The Christopher Brooks Composition Prize provides a unique opportunity for a young North West composer to develop their talent and access mentoring and guidance from leading artists and music industry professionals, culminating in writing a new work that will be premiered by Ensemble 10/10, the Royal Liverpool Philharmonic Orchestra’s new music group, in October 2020.

Athanasia will be supported with a bespoke programme of workshops, masterclasses and mentoring sessions from resident and visiting musicians, conductors, composers, performers and other industry professionals associated with Liverpool Philharmonic.

The prize also offers Athanasia the chance to develop her composition and teaching practice through access to Liverpool Philharmonic’s programme for children and young people, including Liverpool Philharmonic Youth Company, Youth Orchestra and Choirs, higher education partnerships and the transformative In Harmony Liverpool programme in Everton and Anfield.

Athanasia Kontou is a composer and pianist from Greece. Currently studying composition at the Royal Northern College of Music, her music has been workshopped by the BBC Singers, Elias String Quartet and ensemble deCompagnie (BE).  Her first orchestral work was premiered by the Antwerp Symphony Orchestra in May 2017, and other works have been performed in Greece, London, Switzerland, Germany, Italy and Austria.

It is a great honour to be this year’s recipient of the Christopher Brooks Composition Prize. I am most grateful to the Royal Liverpool Philharmonic Society for this incredible recognition and the chance to work with the fantastic Ensemble 10/10. I have no doubt that it will be an experience of a lifetime.

We are delighted to welcome Athanasia to Liverpool Philharmonic this year. We look forward to supporting her journey through The Christopher Brooks Composition Prize and celebrating the performance of her new composition, as part of our strong commitment to commissioning new music.

In 2015, Athanasia won first prize at the An Art Artistry Contemporary Piano competition.  She is a two-time recipient of the RNCM Patricia Cunliffe Composition Prize and was one of four finalist composers chosen for the RNCM Gold Medal competition in June 2019.

Athanasia's music has been workshopped by the BBC Singers, Elias String Quartet and ensemble deCompagnie (BE). She has also been commissioned by the Purcell School of Music and the RNCM New Ensemble, and she recently wrote a new work for Psappha which was premiered in the New Music Manchester festival. Her chamber work ‘After Psappha’ will also be featured later in Psappha’s 2019/20 season.

The Christopher Brooks Composition Prize in association with the Rushworth Foundation was established in 2015 during the Royal Liverpool Philharmonic’s 175th anniversary year and forms part of the organisation’s continuing commitment to the commissioning and performance of new music as well and supporting home-grown talent. The competition is open to a composer aged 18-30 living, studying or working in the counties of Merseyside, Cheshire, Cumbria, Lancashire, and Greater Manchester.

Carmel Smickersgill was the winner of the 2018 Christopher Brooks Composition Prize. Her work Charcoal will be premiered by the Royal Liverpool Philharmonic Orchestra’s Ensemble 10/10 on Wednesday 6 November 2019.

The late Christopher Brooks was a founder of the Lancashire Sinfonietta (now sadly disbanded) and gave an immense amount of support and encouragement to young musicians during his lifetime.

The Rushworth Foundation established by Jonathan Rushworth whose family were founders of Liverpool’s famous music retail and pipe organ building business, Rushworth & Dreaper, continues a 176-year tradition of support for the musical life of the city of Liverpool.

The Ivors Academy of Music Creators is the home of songwriters and composers of all genres. Representing music creators in the UK for over 70 years, they campaign nationally and internationally to ensure that the rights of members are protected, especially as the music industry continues to rapidly change. The Ivors Academy have bestowed the biggest honours in the industry to giants of modern composition and songwriting, and are reaching out beyond their existing members to bring in the new, the different, the amazing and the diverse and represent the wonderful range of music talent that exists across the UK.
www.ivorsacademy.com