Please note that this event will now take place in Liverpool Philharmonic Hall. Ticket holders have been contacted and any additional available tickets will go on sale soon. This event was originally advertised as taking place on Friday 24 July 2020.

Ian Prowse will also be performing a second show with Amsterdam on Saturday 24 July 2021.

Frontman of Amsterdam and previously of indie cult band Pele, Ian Prowse is a musician, singer, songwriter who wears his heart on his sleeve and writes straight from the cuff.

Raised on the rallying cry of protest songs, influenced by the Celtic sounds that make Liverpool so unique and inspired by the songwriting craftsmanship of Bruce Springsteen, Paul Weller and Mike Scott.

After releasing a best of album Does This Train Stop On Merseyside: The Very Best Of Ian Prowse, two solo albums Who Loves Ya Baby and Companeros, and remastering his first two classic Pele albums Fireworks and The Sport of Kings, Ian released Here I Lie, a brand new album of songs that tackle life, love, loss, death and Liverpool.

Since being released in April 2019, Here I Lie has racked up an impressive array of plaudits from fellow songwriters like Elvis Costello, Baz Warne (The Stranglers), Miles Hunt (The Wonder Stuff) and Damien Dempsey, and amassed top reviews from Daily Mirror, The Skinny, R2 and Louder Than War.

2020 is a big year for Ian - he’s supporting Elvis Costello on his UK tour and releasing The Story of Ian Prowse, a retrospective collection of his 30 year career, supported by an acoustic tour.

‘We’ve spent the last couple of years taking my first two (re-released) Pele albums all over Europe to celebrate their 25th anniversaries. We only wanted to make a new album if the songs not only stood shoulder to shoulder with our history but were better than we’d ever done before.’
Ian Prowse on Here I Lie. 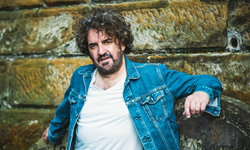