Merseyside hero Ian Prowse is a guitarist, singer-songwriter, and frontman of Amsterdam and previously the frontman of indie cult band Pele.

Raised on protest songs, influenced by the Celtic sounds that make Liverpool so unique, and inspired by the songwriting craftsmanship of Paul Weller, Mike Scott, Bruce Springsteen and Elvis Costello, it was no surprise, that when the rest of Britain was swaggering along to the baggy sound of The Stone Roses at the start of the 90s, Ian put together a band that marched to their own beat.

The result was Pele, a five piece alternative rock ‘n’ pop band with an infusion of Celtic sounds, and a live show that became stuff of legend. They released two studio albums, one live album and six singles.

Amsterdam saw success with their first single ‘The Journey’ hitting the UK top 40, but it’s their song ‘Does This Train Stop on Merseyside?’ that cemented Ian’s place in the hearts of DJs, songwriters and music fans alike - Radio 1 DJ John Peel was reduced to tears every time he put it on, openly crying live on air because of its connection with Liverpool, the city he loved.

Ian will be celebrating the release of brand new album 'Here I Lie' which was made with the help of 18 musicians including Robbo & Nico from first band Pele. The album has already been highly praised by Elvis Costello, Damien Dempsey & Miles Hunt as one of Ian's best yet.

The 4 piece band show will also include plenty of songs from Pele & Amsterdam as well as a few surprises.

I always come to an Ian Prowse record prepared to learn. It goes without saying that he will make a beautiful carriage of the music he loves; rock and roll, folk airs and the lessons learned from the bards of Asbury Park. But Ian doesn't just sing of the here and now but also reaches back into the past for a passionate take to tell or to sing of a street we may no longer recognise or an injustice that might tell us something about today. This truth is probably the best thing about 'Here I Lie'.
Elvis Costello 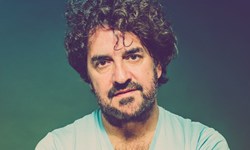