Armed only with a chair and a mic, stories, jokes and poetry Henry Normal takes on the world looking for a win-win situation.

Henry co-wrote and script-edited the multi-award winning The Mrs Merton Show and the spin off series Mrs Merton and Malcolm. He also co-wrote the first series of The Royle Family and the BAFTA award-winning Paul and Pauline Calf Video Diaries, Coogan's Run, Tony Ferrino, Doctor Terrible, all three of Steve Coogan's live tours and the film The Parole Officer.

Henry set up Baby Cow Productions Ltd in the 90s, which have produced highlights such as Philomena, I Believe in Miracles, Gavin and Stacey, Moone Boy, Uncle, Marion and Geof, Nighty Night, The Mighty Boosh, Red Dwarf, Hunderby, Camping and Alan Partridge.

Since retiring in April 2016, Henry has written and performed eight BBC Radio 4 shows A Normal Family,  A Normal Life, A Normal Love, A Normal Creativity and A Normal Nature combining comedy, poetry and stories about his family. His ninth show A Normal Community will be recorded in June 2022 for transmission in the summer.

Now Henry Normal returns to the Music Room with his show Sit Down Poetry - it's like stand up poetry, but more thoughtful and relaxed and easier on the legs! 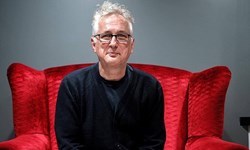