Ground-breaking, chart-topping, genre-bending, globetrotting, instantly enthralling… it’s little wonder that Talisk rank highly amongst the most in-demand folk-based groups to emerge from Scotland in the last decade and more.

Mohsen Amini (BBC Radio 2 Folk Awards 'Musician of the Year' 2018), Graeme Armstrong, and Benedict Morris (BBC Radio Scotland 'Young Traditional Musician of the Year' 2019) fuse concertina, guitar and fiddle to produce a truly innovative, multi-layered signature that has captivated audiences around the globe. At its core, three seemingly acoustic instruments - but in the hands of three master craftsmen; one unmistakable, bold sound and a captivating live show.

Following their critically acclaimed albums, Abyss and Beyond, and with new music on the horizon in 2022, audiences worldwide are hotly anticipating the latest chapter from a group lauded by leading world music magazine Songlines as 'incredibly infectious and endearing… fresh, invigorating, accomplished'.

This is a standing event.

Talisk will also be performing a seated event on Tuesday 29 November - find out more here. 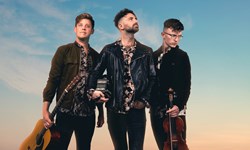