Please note this event has been rescheduled to Wednesday 29 June 2022. The event was due to take place on Sunday 29 May 2022.

A folk singer, songwriter and activist from Leicester, Grace Petrie has been writing, recording and touring relentlessly for ten years. Her unique takes on life, love and politics, and the warmth and wit with which they are delivered, have won over audiences everywhere, across the alternative, folk, political and comedy scenes.

She has racked up tour supports with Emmy the Great and Billy Bragg, and in 2019 supported Frank Turner on his UK arena tour. Grace has also made her mark in the comedy scene, regularly supporting comedians Robin Ince and Josie Long on tour, and she has also collaborated with some of the most respected names in folk, including Leon Rosselson, Roy Bailey and Peggy Seeger.

Grace regularly tours sold out shows across the UK and has appeared at an eclectic genre-crossing mix of festivals Latitude, Musicport, 2000Trees, Shrewsbury Folk Festival, Greenbelt, Cambridge Folk Festival and in 2019 packed out The Acoustic Stage at Glastonbury Festival.

Through all of this she has quietly become one of the most respected songwriters working in the UK today. She has been a frequent guest on BBC Radio 4’s the Now Show, has appeared on Channel 4’s Random Acts and has been featured in The Guardian, Diva Magazine and The Independent On Sunday. In 2019, Grace was nominated as 'Musician Of The Year' in the Diva Awards.

Please be aware that there is no premium seating for this event. 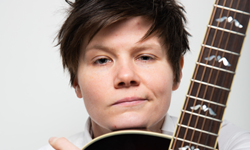