Skeleton At The Banquet is the new album from two-time Grammy award-winning singer-songwriter and multi-instrumentalist, Gill Landry.

Landry, originally from Louisiana, started out as a busker on the streets of New Orleans before becoming a contributing member of the band Old Crow Medicine Show, with whom he recorded 4 albums and toured from 2004 to 2014.

Skeleton At The Banquet is Gill Landry’s fifth solo studio album and the follow-up to 2017’s Love Rides A Dark Horse. The album was recorded and produced in Los Angeles by Gill and Seth Ford-Young (Tom Waits, Edward Sharpe), and features Landry on vocals, guitars, pedal steel, keys and harmonica, Seth Ford-Young on bass, Josh Collazo on drums, Stewart Cole on trumpet, and Odessa Jorgensen on violin.

'This album is a series of reflections and thoughts on the collective hallucination that is America...With a love song or two thrown in for good measure. I wrote it from within the refuge of a small flat, in a small village in western France where I spent last summer. I found it to be a good place for seeing the forest through the trees, so to speak.'
Gill Landry 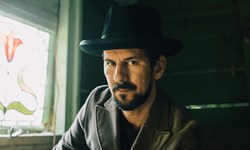