Our ticketing system Spektrix uses four cookies that are essential to making our website function properly. These four cookies track your booking process, allow you to log in properly as a customer, set test cookies for blocked Third Party Cookies before you start the booking process, keep track of your basket and improve your experience (e.g. programming the ‘recently visited’ and ‘recommended’ boxes at the bottom of our home page based on what events you are browsing through). You can change the options on your device or browser to stop accepting these cookies - however this may mean you are not able to use all functionality of our site.

Two of Scotland’s most revered multi-instrumentalists, Mairearad Green (accordion and bagpipes) and Anna Massie (guitar, banjo, and fiddle) are a truly captivating duo, providing a highly energetic performance with an instantly warm and friendly stage presence.

Having played alongside each other for over ten years, they revel in an intuitive approach to each other’s musical ideas and interpretations, and an “almost telepathic communication” on stage (Hi-Arts), effortlessly showcasing the fruits of duo partnership to the highest level, creating “music more than the sum of just two parts” (The Scotsman).

Mairearad and Anna both grew up in the Scottish Highlands, and as a duo they have enjoyed many successes, including five stars in The Scotsman and high praise from KT Tunstall, becoming a much-loved live act.

Their four albums have met wide critical acclaim, both of their first being recorded with just the two musicians.

Both award-winners, Mairearad currently performs with King Creosote and Mike Vass and Anna with Blazin’ Fiddles and Rant. They have also previously performed with a number of well-known bands and artists; The Poozies, Bella Hardy, Box Club, Kate Rusby, Karine Polwart, Karen Matheson, Capercaillie and together in Scotland’s one and only Celtic big band, The Unusual Suspects. 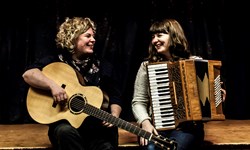